Despite The Name , Sometimes The Bush Really Pisses Me Off

There are so many things I have to write about at the moment. As the end of ‘wet season’ comes to an end ( what a joke , I think it rained 5 times ?! ) the crocs up here in the topend are moving around more and can be found just about anywhere you turn. So there have been ‘ croc attacks’ ( one guy got bitten on the head apparently , but still survived to tell the NT news all about it another guy appeared on the front page last week after he was ‘attacked’ by a croc which was all of 1 meter long ..  ) and  heaps of croc sightings . But I have been too busy dealing with my own life threatening situations to think up witty blog posts to go with the above news stories.

It all started with this:

Now we don’t normally go around shooting snakes , but this bugger was headed for Chaos’s bed and the outside loo so he had to go . Luckily for us Maisy is more switched on than Chaos and went banana’s when she saw the snake. Chaos just kept snorin’ away in ignorant bliss ….. 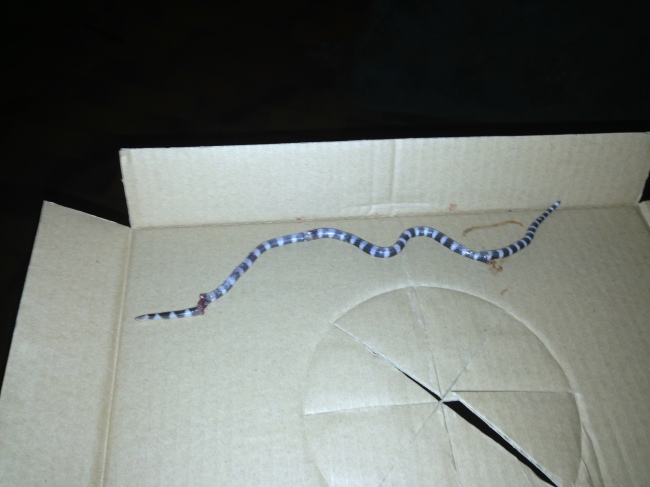 I had just put Marli down and walked into the kitchen on my way to the toilet. I noticed a shiny looking string on the tiles and thought it had come out of a dress or bikini top. But something made me stop when I went to pick it up. So I stood on the other side of the kitchen and threw random crap from the kitchen bench at it until it jumped and started slithering towards me with its head raised looking a tad bit pissed off ….. This is the point when I realized just because I live in the bush doesn’t mean I am any good at dealing with situations that involve venomous animals. So I ran outside in my knickers and called Dave who was never going to be able to help because he was on the other side of the country at a wedding. So I yelled at him for 5 minutes , hung up , called a girlfriend who had just finished a massive Sunday session and could not legally drive anywhere. Out of options I called the pub up the road and luckily for me the barmaid felt sorry for me and sent her boyfriend over to get rid of the snake ( which turned out to be called a Bandy Bandy ).

The boyfriend tried to remove the snake without killing it but by this stage it was well and truly pissed off and ended up getting decapitated.

Not even two weeks later my mother flew up to help out with Marli and after a shopping trip we were walking across the lawn when I noticed the stick I was about to step on had eyes …. My Mum was so brave , she grabbed a crow bar and smacked it over the back but we’re not sure if she killed it or not because it freaked out and headed for the garden bed … I haven’t seen it since …..

2 thoughts on “Despite The Name , Sometimes The Bush Really Pisses Me Off”